Ever since reports of the virus first emerged in January, we've followed the impact of the pandemic on business-to-business trade and the health of global supply chains. And our latest findings from our analysis of transaction volumes across the Tradeshift network paint a stark picture of the impact of the virus on global trade.

Trade falls off a cliff in Q2

Trade activity fell by 14.8 percent in the second quarter of 2020, according to our data. This is the biggest quarterly fall we’ve seen on the network and came as economies around the world shut down to prevent the spread of the virus. 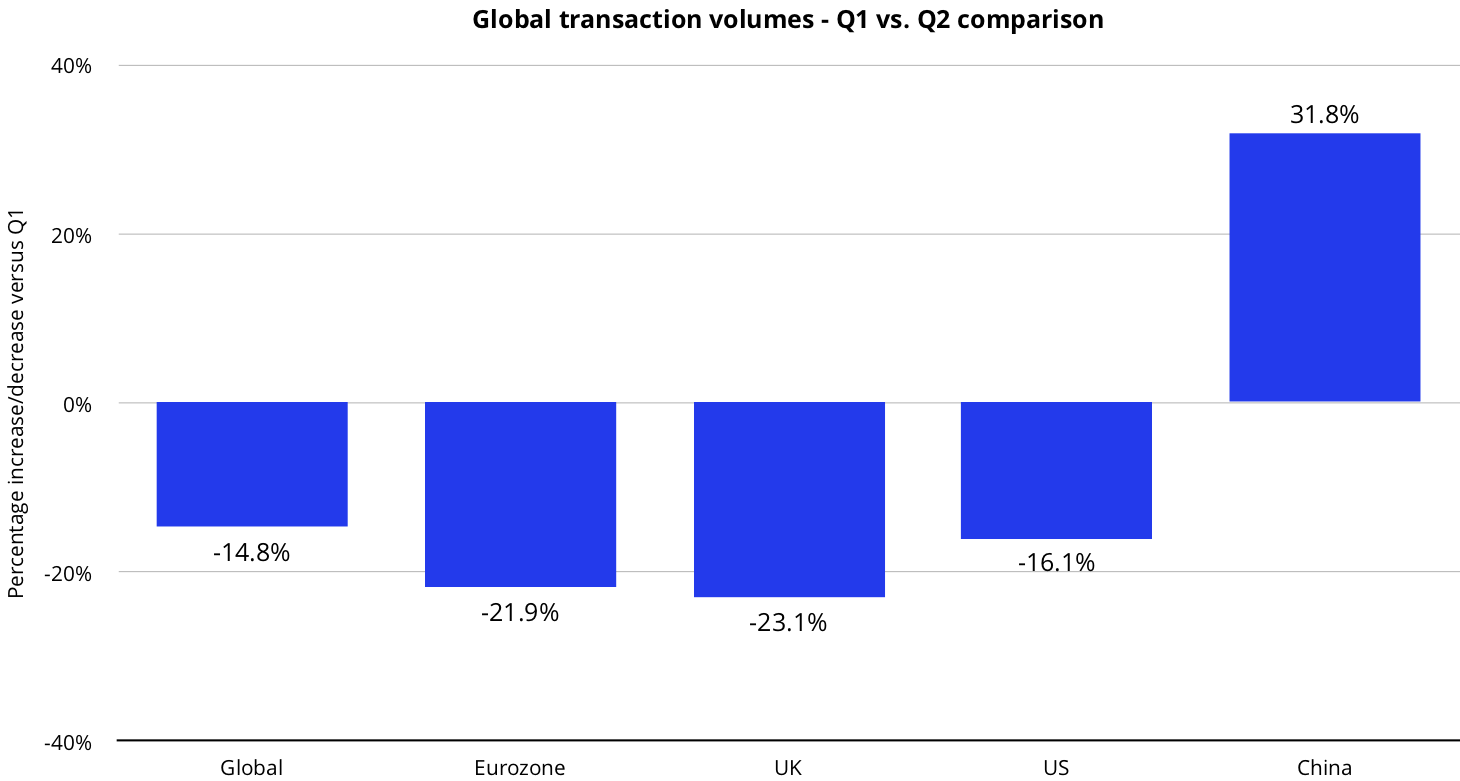 In the West, the virus has hit the UK hardest with transaction volumes falling by 23.1 percent Elsewhere, transaction volumes across the eurozone fell by 21.9 percent overall, including a 44.5 percent drop below the pre-lockdown levels during the week commencing 13th April.

Stateside, trade activity in the US declined by 16.1 percent, with the lighter approach to lockdown arguably playing a role here. Whether that policy has a sting in its tail will become clearer in Q3.

It's a different story in China. Transactions across the network came roaring back as the country eased its lockdown in late February/early March. Average weekly transactions across our network rose a staggering 430 percent once factories reopened and began fulfilling the backlog of orders.

Although overall transactions in the country were up 31.8% against Q1, it’s not all good news. Trade flows in China often dip in Q1 because of the Chinese New Year holiday. And if we compare Q2 this year to Q4 of 2019, we see that overall transaction volumes are significantly down from where there should be.

We also saw a slight dip in transaction volume towards the end of the quarter. Could this be a sign that recovery is stalling in China? It’s too early to tell. It does show that we should expect bumps in the road as economies recover, however.

Are we on track for a global recovery?

The Q2 data from China may show what’s coming in Europe and the US in Q3.

The green shoots of recovery have emerged in the West, but the overall picture remains volatile. After record lows through April and May, order volumes have trended upwards in June.

Yet, given the globally interconnected nature of trade and supply chains, a full recovery won’t happen unless everyone is ready to recover. That may take some time. According to PWC’s most recent CFO Pulse survey, one-third of respondents in the US believe it will take more than six months to recover.

“China’s bounceback provides a useful indicator of what the shape of recovery could begin to look like as other countries start to bring the spread of the virus under control,” says Christian Lanng, CEO & Co-founder, Tradeshift. “A huge domestic market gives China certain advantages in terms of the speed of its recovery. But the interconnected nature of global supply chains means that not even China can fully recover in isolation. The entire ecosystem needs to be in good working order. Right now, that is not the case.”

Download your free report to get more insights into the Q2 health of global trade.

Get a demo now